Who will win the NCAA Tournament?

Everyone likes to root for the underdog - Can Loyolla pull off a huge upset and win the whole tournament? Who do you think will win?

Should I go to the Super Bowl and find a way to hit Tom in the throwing hand with a hammer. Patriots don't need another SuperBowl ring. 6
Yes
4
No
1
Screw his hand break his legs.
0
Kidnap him because he might still play with those other injuries.
2 comments
FitnessTrainer 3 Feb, 2018

1) That's a threat, so anonymous or not you might want to be careful. 2) Not liking a player/team is one thing, but it's not worth threatening violence over. You'd never say something like this if it was your team/quarterback winning so much, so don't say it about others. There's nothing wrong with hoping they lose, but hoping they get injured is messed up.

Not necessary, as it turns out!

With the Superbowl fast approaching, I am left with a tough choice. I am a New England Patriots fan living in the Philidelphia area and I'm trying to decide where to watch the Super Bowl. I have two options, a Super Bowl party being thrown by my gym or watching at home with my family.

Reasons to watch at my Gym: My gym has a great community of people who are likely to show up making watching the game more exciting than just watching with family. They will also have catered food and lots of people will be bringing drinks and other stuff. There will be chances to win money by betting on the game which is always fun.
Reasons not to watch at my Gym: I am a Patriots fan living in an area widely accepted to have the worst fans in the NFL. I'm afraid being the only Patriots fan at the party will lead to me being verbally assaulted for the crime of simply not supporting the home team.

Reasons to watch at home: I'll be watching with just other Patriots fans so I won't have to worry about the above reasons for not watching at my gym. My sister is coming to watch and make dinner and she is a really good cook.
Reasons not to watch at home: There's just something more exciting about watching a game like the Super Bowl with fans that are cheering for the other team. Makes the good plays more exciting and the close calls even tenser. I don't want to stay at home just because people might be mean to me for liking a different team.

Before you suggest it, I offered to my family to come watch the game at the gym too and they turned me down. So if I go, I'm the only one from my family that is going and likely the only Patriots fan there. The good thing is that I don't scare, threaten, or bully easily and I trust the gym management not to let things get physical even if some Eagles fans there really have a problem with me cheering for the Patriots.

Who do you want to win the Superbowl?

Superbowl Sunday is approaching and I'm pretty excited for it. The Eagles and the Patriots have a long overdue rematch and I think it should be a good one. Sports fan or not, I'm wondering who you want to win the Superbowl. I believe I'm in the majority when I say "Go Birds!" but who knows? I think we're all tired of seeing the Patriots and that boy-scout Tom even make it to the big game. But, what are your thoughts? Eagles or Patriots?

Patriots fan living in Philly... Means I'm in for a fun time no matter who wins 😅 if the Patriots do I may die at the hands of angry fans. If the Eagles do the fans will never let it go... Not sure which is worse.

Is Nick Saban the beast college coach ever?

The day I got kicked out of a baseball game...

Baseball is a great event to go to with your friends to hang out and have a good time. And, sometimes you run into old acquaintances; the more the merrier I say. But sometimes...sometimes this happens. (The short version, anyway.)

A while back I went to a baseball game with some friends and, what with it being such a grand event, I happened to run into an old classmate of mine from grade school. She was hanging out with two guys but, as soon as she saw me, she got really excited and ran over to say hello. She was ecstatic, siting all the good times we had at school, how we were the "real O.G.'s" and so on. She would not stop talking, honestly. Here's the thing. We were never good friends - like ever. So, it was weird to me that she was putting on this much of a face. It didn't bother me that much, not until the following.

She turned to the two guys next to her and told them to get lost. They were not pleased and expressed that to me; and if that is the manner you leave a group of people, something tells me they were not people she knew very well. It was suspicious so, I tried to say my goodbyes and go back to my seat but she started following me and asked, "So, where are we going?" She insisted on following me to my seat, almost knocking the beer out of my hand with her flashy arm movements. Something wasn't right but, I continued to my bleacher seats. When we got to the aisle, a security guard asked for our tickets; I showed mine, she showed hers, guard told her that her seats were elsewhere. She didn't like it very much and started yelling and cussing at security. She went on and on, even stating that I was her boyfriend. Uhhhhhhh- I couldn't even get a word in to correct the situation, she was yelling so much. I apologized to the guard but he told me to take her and wait on the side of the aisle. Next thing I know, three more security guards come over and tell us we have to leave. I tried explaining everything but they didn't want to hear it. They played tough, wore a mean mug, grabbed both our arms and escorted us out without so much as a trial. She put up a fight but, I...I just went with it at that point. Before I knew it, we were outside the park.

I'm guessing it was cocaine. She was pale and way too excited. Anyway, I babysat her until the game ended about 30 minutes later, when I could meet my friends. They came out and were surprised as I was. Wrapping it up, we got her a cab home and I don't talk to anyone at baseball games now. But really though, should I have been kicked out?

Seriously? That is not a good reason to no longer go to baseball games. Just stay away from that crazy chick.

I still go with friends! But, it's awkward enough seeing people you barely know (all drug induced havoc aside) so if I see any, I tend to avoid them.

Reality is for people that can't handle drugs....

I can not support the NFL anymore. I thought it was very un-American to try and silence peaceful protesters. The men and women of the United States Armed Forces have died fighting to protect my freedom to stand up against injustice and inequality. To protest peacefully only honors that sacrifice, those that choose to try and silence the protesters instead of becoming educated on the reason behind the protest are the ones who truly disrespect the flag freedom and the men and women of the service. I will not be watching any games this season because Colin Kaepernick remains unsigned. When the NFL shows they respect human rights and human decency I may return as a fan. What are you going do? 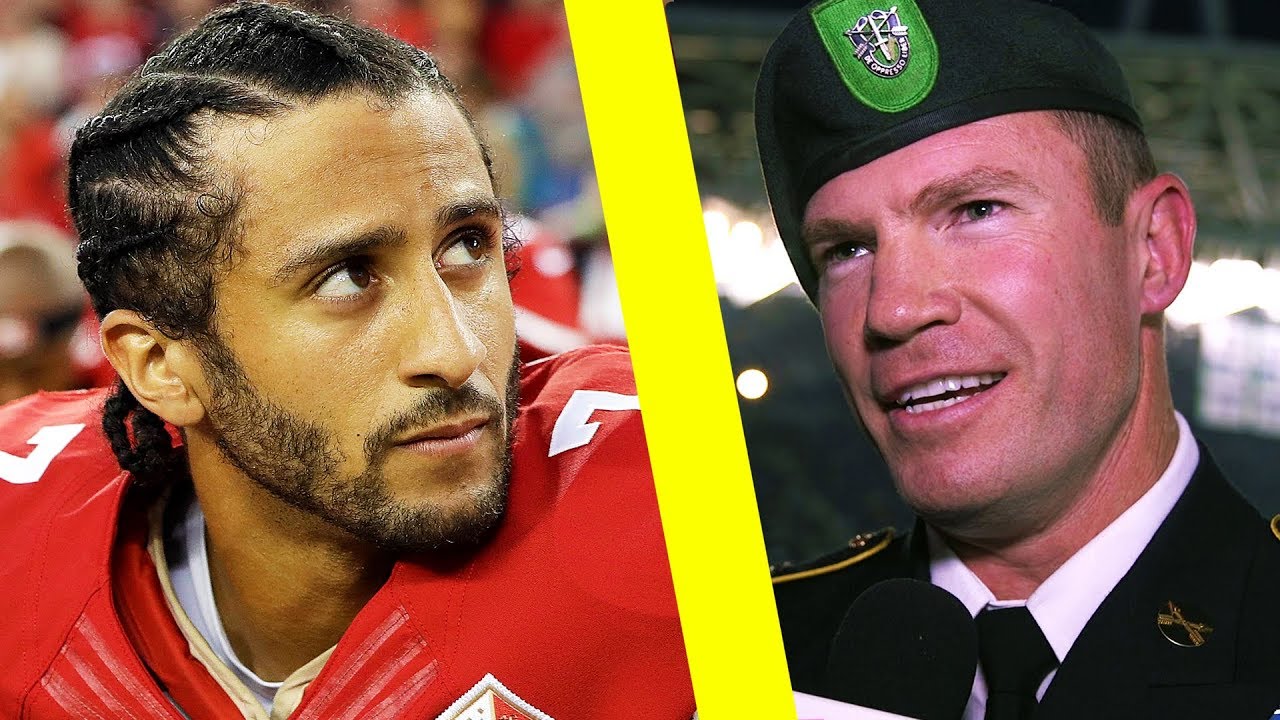 9
Yes, it's not fair that the NCAA profits off of them and they get nothing.
5
No, they are students, not professionals.
0
Other (in comments)
1 comment
ANONYMOUS 28 Nov, 2017

#takeaknee is a peaceful protest against the mistreatment of the African American community by our police. This movement has caught on and more and more teams are participating. I wonder what will happen if this continues? Should the NFL stop playing the anthem?

What should our name be?

So for the past three years, I've competed in this super tough but super fun event. Think like a Tough Mudder mixed with a scavenger hunt. The event allows you to compete in either 2 or 3 man teams, the teams can be all men or all women or a mix, doesn't matter to the event staff. It's an extremely physically demanding event. Last year I believe we ran close to 8 miles, much of it being uphill while completing challenges, then did close to 11-12 miles of biking while completing still more challenges. It's certainly not for the faint of heart! One of my teammates and I have done it together for the past three years while the last person has been switching out cause we've been unable to find someone who both wants to do it more than once and is able to make it for the next year. This year I think we finally found someone who will be able to come back next year so that we will finally be able to compete with the same year 2 years in a row. For the past 3 years, we have stuck with naming our team Justice League and wearing shirts of various members of the justice league. However, through a mix of mistakes made on the side of the event coordinators and our side, we have never been able to place in this event despite easily having the strength and skill to do so. Thus we have decided it might be time for a name change to spruce things up and get us out of our rut... I'd love your opinion on the new name or if anyone has a great name they think we should use.

Note: Our team is 3 fit mid-twenty-year-old men (two of us have 6 packs, I'm working my way there, yes this is important)

Previous Next
Log in Join
Just browse for now